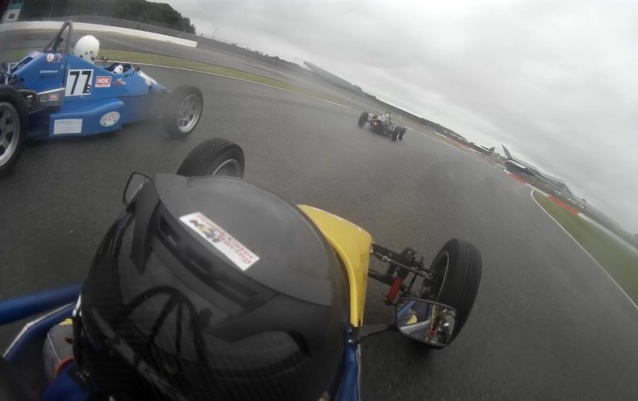 Making up 8 places before the first corner at the start of the first race sadly came to nothing, as engine failure at the end of the first lap forced retirement.

Starting out the day with the aim of testing a newly rebuilt gearbox, James Cater had the added problem of a very cold and wet track – having only driven at Silverstone International last year in dry conditions.

A miscalculation with the suspension settings (we were totally focused on the gearbox and actually went out with the dry setup we’d used at Anglesey!) added to the problems, but despite a few spins James still qualified 23rd of the 38 cars entered.

With the track almost dry for the first race, conditions were better suited on what is a brilliant circuit, exactly one year from when James had his first ever race there.

A demon start took the RTV Sheane closer to the B class podium finish we were aiming for, before a 120+mph spin at Abbey at the start of the second lap meant dropping back down the order.

Red flags a few corners later due to another accident caused a restart, but with the engine sounding off, James took the restart from the pit lane after checking in with Glenn Hay. Sadly, the problems got worse back on track, and he had to pull back in to the pits and retire from the race.

An inspection found two engine studs had snapped, one proving too tough to remove the remains of the broken thread from the engine case at the track.

Despite a valiant effort from Glenn to repair the engine, we unfortunately ran out of time before the start of the second race, and the weekend was over for us.

We’re disappointed with the result, especially as James had new sponsor decals on the car for British action camera company JooVuu, and also the newly formed RTV.

We will be hoping to make amends and get a solid result at Snetterton on September 24th for the final race of the year.

As always, you’ll be able to read the more in-depth race report from James’ perspective on www.jamescaterracing.com shortly.

Here is the onboard footage from qualifying: